The question on technology and its effect on the quality of our lives is one that has found its way into mainstream debate in the recent past. Barely a quarter of a century ago, all children needed for their entertainment were fields and a rich imagination. They would run all over playing all kinds of creative games – cops and robbers, hide and seek and others. There was no need for internet or Wi-Fi, and you could never catch them hunched over some electronic device repeatedly pressing some buttons in the name of playing some games or getting some other form of entertainment. Many believe that the lives of the children and even adults were far much simpler, and that they lead healthier lifestyles. On the other hand, it is incontestable that technology has revolutionized the way people communicate and do their things. Indeed, human beings have become heavily reliant on technology as the primary source of knowledge and information. The world has truly become a global village as a result of the advancement in the technology in transport, communication, health, food, housing and others. It goes without saying that technology can only be useful if it adds to the quality of life. If it is used irresponsibly, it can serve as a hindrance to the aspirations of human beings to live good quality, fulfilling lives.

Human health has benefitted immensely from biological technology. There have been great strides made in nanotechnology, physical health, and mental health and other areas. For example, people with physical and heart conditions have greatly benefited from inventions like artificial limbs and the pacemaker. Of course, there are those who say that biological inventions interfere with nature; and that nature should be left to take its course. This school of thought has it that plans to clone human beings can only spell doom to the balance of life as it is now. They further argue that biological technology makes people to be careless with their health by leading poor lifestyles, as they feel that whatever happens, technology will help restore their health status. However, the proponents of biological technology counter this by emphasizing on the virtues of modern inventions. For example, they contend that medical technology saves lives. The pacemaker is one piece of technology that has done a lot to bring down the number of fatalities from heart attacks. Many victims of cardiac arrest stand better chances of surviving as a result of the wide use of this product, than would have previously been thought possible. Another revolutionary product is the prosthetic limbs that are fitted with micro-chips and sensors to help the physically challenged lead better quality lives. The bottom-line here is that were it not for inventions in various medical fields, human beings would still be confined to the misery that was characteristic of the lives led by their Stone Age ancestors.

As a tool of progress, technology has made the world a peaceful and more conducive place for human interactions. Solutions to world problems can be obtained in an easier way in the modern times as than say, happened one century ago. For example, inventions in the transport industry have made it easier to move mediators and peace keeper troops from one end of the globe to a volatile hotspot in record time. Conversely, barriers between human beings of divergent cultures have been lessened due to the advent of the cyber culture. People can communicate freely via the internet, exchanging cultural anecdotes that enrich their lives and endear them to each other. This is good for the world. However, these very same features of technology can be used as tools of fear and oppression. Terrorist organizations use social media platforms to post gory details of their actions, thus spreading fear to their target audience. Indeed, technology enhances culture if only it is used responsibly.

Technology has changed the way business is conducted. A quick look at the life around us will show that people have become more efficient in their business lives, thanks to technology. It has become increasingly easy to schedule meetings at a moment’s notice. It is now possible to hold video conferencing with business partners from different corners of the globe. This has dramatically cut down on the cost and time required travelling for physical business meetings. As a result of this development in technology, businesses and individuals can make money overnight through online transactions. According to an online research paper by the Sun newspaper, they found that technology had enhanced the capability of massive transfer of funds, at a fraction of the time it took about 20 or so years ago. Companies have taken advantage of technology to revolutionize how they carry out their marketing strategies. Many companies have a strong online presence in multiple platforms. The use of SEO strategy for marketing has made it possible for the companies to interact more with their customers. Indeed, technology has not only reduced the cost of doing business, but has also seen to it that a company can get worldwide appeal within a very short period of time. On the other hand, there are a number of people who frown on the use of technology in business, citing the proliferation of fraudsters who have invaded the field. They argue that more money has been lost to cyber hacks in the last ten years than was ever lost in the previous 100 years of doing business “the good old way’’. The existence of cyber hacks that steal identities and proceed to transact businesses with stolen credentials has also become a matter of major concern.

The fact that technology can be addictive has been widely discussed. Kids as well as adults are affected by this. Kids no longer engage themselves in physical activities outdoors, but will often be found indoors doing some stuff on the internet. Both kids and adults have found that the easiest way to while away their time is to surf through various sites in the internet in search of entertainment, information etc. This becomes a problem when they can no longer control this behavior – it becomes an impulsive disorder. Addiction can also lead to the breakdown of societal values when the addict gets hooked to sites that glorify violence, pedophilia, substance abuse and pornography. Access to technology for such purpose is bound to compromise the individual’s productivity in their community. Adults will neglect their duties and their productivity in the work place will drop; while the kids will experience friction with their teachers and parents as a result of poor performance in school term papers.

Misuse of technology makes some people develop anti-social tendencies. Often, people use phones as the lone source of communication with their peers, colleagues, family and friends. Over-reliance on technology in this manner can easily lead to poor communication skills and anti-social behavior. People become enslaved to gadgets of communication; they give cellphones priority even where physical direct communication would have been more appropriate. For example, a break-up is a very personal thing and would be best done through person to person communication. Although there are those who may argue to the contrary, breaking up with a lover via a text or a call is not only insensitive, but also downright rude and uncouth. Doing so has the attendant risk of the entire matter spiraling out of control into cyber bullying.

In conclusion, the benefits of technology cannot be wished away. It has impacted positively on societies across the globe. Improvements have been realized in global economy, medical field, transport and communication, peace and ware fare, among others. Of course the wrong use of technology has raised pertinent ethical issues such as pollution, war, abortion, health concerns and ozone depletion. All are called upon to use technology creatively and responsibly, with the aim of enhancing peaceful co-existence among peoples of all cultures. 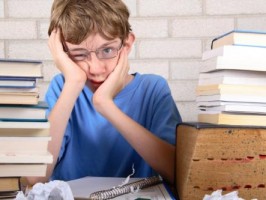 Many students shown learning disabilities characteristics but neither their parents nor teachers notice about them. Because of that, they continue to have poor performance on their achievement at school. This is a very pity condition since every student has hidden potentials which need to be blossomed. The situation could get worst when people around them start to give them bad label, for instance lazy or stupid students. Those labeling will not help students to meet their full potentials. Instead of complaining, parents and teachers should know more on how to assess students’ learning problems.

There are psychological and behavioral characteristics of learning disabilities which can be studied easily by everyone. First, you may start from dyslexia problem that very common on children. Student with dyslexia have problems with writing, reading, and understanding conversations. However, not every student who shown those symptoms could be categorized as dyslexia. The diagnosis will be valid once it is conducted by professional psychologist. But, teachers and parents could be the first one to notice the learning problems before go seek for professional helps.

Still from dyslexia, students who got this condition will have difficulty on reading or writing. Of course this situation will not be a problem if we talk about kindergarten or first year students. The reading or writing difficulty will be a problem when the students have met certain ages, where they should know how to read and write well. Another problem which could be found in school is dysgraphia. Even though it has same difficulty to write condition just like dyslexia, dysgraphia is slightly different.

Students with dysgraphia could be noticed easily from their bad handwriting. If the handwriting could be improved better, that will not be better. But if the contrary condition happens, those students need to meet professional assessor to get valid diagnosis. The other dysgraphia characteristics are: strong dislike with drawing and/or writing and also trouble with grammars. Students with dysgraphia problems have difficulty to write down their ideas as well. When writing lessons come, those students will lose their interest quite fast. They need to say the words out loud when writing.

Although mathematic consider as one of most difficult lessons, there is a condition when people really cannot understand this lesson. That condition is named dyscalculia, where people cannot understand the basic concepts of arithmetic, for instance negative-positive numbers, number lines, and many more. If you know those mentioned key characteristics of learning disabilities, you can help the students better.

You can find Technology News here